We continue to survey the known lower bounds for incidence problems (the previous post in this series can be found here). After a couple of posts in

we now return to

, to introduce a new technique that I recently learned about. This technique was discovered by Jozsef Solymosi, and is described in a work of Solymosi and Endre Szabó that is unpublished at this point. As seems to often be the case with results of Solymosi, it is quite simple and elegent. In

this technique yields bounds that can also be obtained from Elekes’ technique (discussed in a previous post), but in higher dimensions it leads to new bounds that are also tight (which would hopefully discuss in a future post). I would like to thank Jozsef Solymosi for allowing me to describe his technique in this blog, and to Frank de Zeeuw for discussions that led to this post. 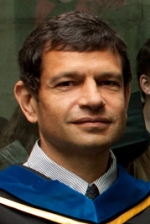