We finished our IPAM semester with a workshop at lake arrowhead. You can find our “graduation pictures” at the IPAM facebook page (just don’t look at my horrible picture…). In honor of this amazing semester, here are some pictures that I have from it. If you have other nice pictures, you’re welcome to send them to me and I’ll place them here. 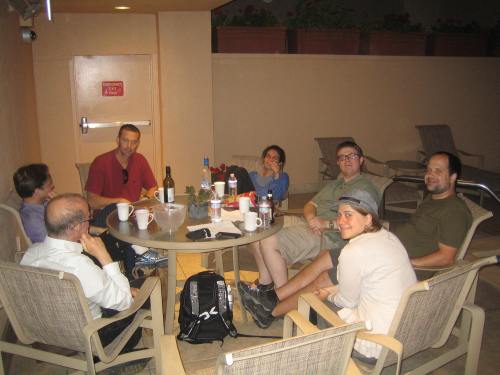 A farewell party to Micha, just before he was leaving LA.

The notorious reading group, trying to get through Harris’ algebraic geometry book. 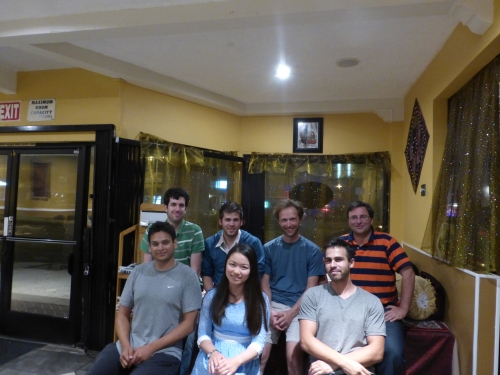 Abdul Basit took us to what according to him is the best Pakistani food that he had outside of Pakistan.

If you have been following this blog for a while, you might have noticed that I have been slowly surveying the various open problems that are related to distinct distances, and the best known bounds for them. I think that my survey is now in a decent shape, so I uploaded it on arXiv.
For this occasion, I wish to mention an open problem concerning surfaces in

, and are interested only in distinct distances that are spanned by pairs of

(i.e., distances between points from different sets). For simplicity, in this post we assume that both sets are of cardinality

. One example of such a result, by Pach and de Zeeuw, is that if each of the two point sets is on a planar curve that contains no lines or circles, then the number of distinct distances between

, the similar (yet non-bipartite) case where one point set is placed a curve was studied by Charalambides and by Raz, Sharir, and Solymosi. However, nothing non-trivial is known for point sets on two-dimensional surfaces. That is, consider, in

, the minimum number of distinct distances between a set

.
Before we properly formulate any questions for this scenario, let us first consider some examples. First, consider the case where

are non-parallel planes in

. In this case there exist two orthogonal lines

is a point on

. We can place the two sets of points on

are parallel planes. In this case we can place a

subset of the integer lattice on each of the planes. For example, we may assume that the planes are defined by

, and that the points of the two sets are

A variant of Erdős’ analysis of the planar lattice (e.g., see Section 2 of the survey) implies that the number of distinct distances between the two sets is

.
Unlike the planar case, it is not immediately clear whether the above examples are tight. For example, the

distinct distances. This leads to the following conjecture.
Conjecture. Given a set

, the number of distinct distances between the two sets is

?).
Assuming that the conjecture is true, we have the following natural question.
Problem. Characterize which pairs of surfaces

. For any other pair of curves, the number of distinct distances is

.
This is the first in a new series of posts, in which I will survey the constructions leading to the best known lower bounds for the various incidence problems. Although recently many improved upper bounds for incidence problems were proven, not much progress was made concerning the lower bounds.
We begin with the case of point-line incidences in the plane. This is of course the matching lower bound for the famous Szemerédi–Trotter Theorem.
Theorem 1 (Szemerédi and Trotter). The maximum number of incidences between a set

points and a set

Notice that the linear terms dominate this bound when either

. Since a point-line configuration with

incidences is easy to construct, we focus on obtaining

Recall that our goal is to construct a set of

points and a set of

. Specifically, we assume that

for a sufficiently large constant

whose value will be determined below. As our point set, we take the following subset of the integer lattice.

Given a pair of relatively prime integers

, we define the line set:

. Our set of lines is the union of many sets of the form

that will be set below) and

The resulting point-line configuration is depicted in the following figure. 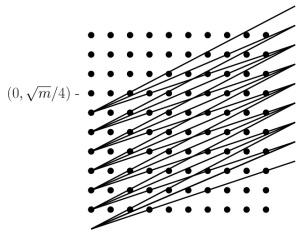