Thanks to Micha Sharir for helping in the preparation of this series of posts.
In a previous series of posts we introduced the basics of polynomial partitioning (see also the pdf version here). However, by presenting an example in

, we avoided the main difficulty in applying the technique, which arises only in dimensions

-dimensional patch, for otherwise no further partitioning would take place.
The technique is based on the following theorem. (As before, we regard the dimension

of the ambient space as a constant, and ignore the dependence on

of the various constants of proportionality in the bounds.)
Theorem 1 (Second polynomial partitioning). Given an irreducible polynomial

, and a finite point set

, there exists a polynomial

of degree at most

, lies in a distinct component of

.
The two proofs of Theorem 1, by Zahl and by Kaplan, Matoušek, Safernová, and Sharir, are quite different from each other. The latter is based on a simple combinatorial trick, while the former is more algebraic and is based on real varieties (not to be confused with varieties in a real space). In this post we present the simpler combinatorial proof. The algebraic proof is also interesting and has the advantage of yielding a partition whose components are all

-dimensional (the approach of Kaplan et al. also allows lower dimensional components).
Proof.     Recall that in the proof of the existence of a polynomial partitioning, we build the polynomial as the product of logaritmically many bisecting polynomials, each obtained by applying the polynomial ham sandwich theorem (e.g., see here, here, and here). The current proof goes along the same lines, except that we use a variant of the ham sandwich theorem. Specifically, we want to ensure that each of the bisecting polynomials is not divisible by

is irreducible, this ensures the co-primality of

.
Recalling the construction of the original partitioning polynomial, we notice that all that is needed is to come up with some sufficiently large finite set of monomials, of an appropriate maximum degree, so that no nontrivial linear combination of these monomials is divisible by

. We then use a restriction of the Veronese map defined by this subset of monomials, and the standard (discrete) ham-sandwich theorem in the resulting high-dimensional space, to obtain the desired polynomial.
Let

be the leading term of

, in the sense that

is largest in the lexicographical order among all

-tuples of exponents of monomials of

be the desired number of sets that we want a single polynomial to bisect. For that we need

). We take the monomials

for which there exists an

that will be determined later. Any polynomial

which is a combination of such monomials cannot be divisible by

, since the leading term of

does not divide any of the monomials of

(for more details about polynomial divisibility, see Section 2.3 of the book Ideals, Varieties, and Algorithms). The number of monomials in this set is

(while we count some monomials several times, this has no effect on the asymptotical value). By setting

, with a suitable choice of the constant of proportionality, we indeed get

monomials. In this case, the degree of the resulting polynomial is at most

as the product of about

that form the partition induced by

If we require this degree bound to be no larger than

does not divide any

, it also does not divide

So far, the method of applying a second polynomial partitioning was used only for bounding numbers of incidences between points and two-dimensional objects in

. For the case of points and curves in

, it seems that a single partitioning suffices. In the next post we discuss the problems that arise in dimensions

. Before getting to these problems, we will present an example illustrating the application of a second polynomial partitioning to a problem concerning incidences between points and planes in 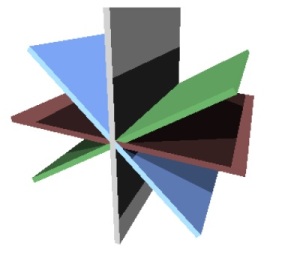 One thought on “The second-partitioning-polynomial technique (part 1)”